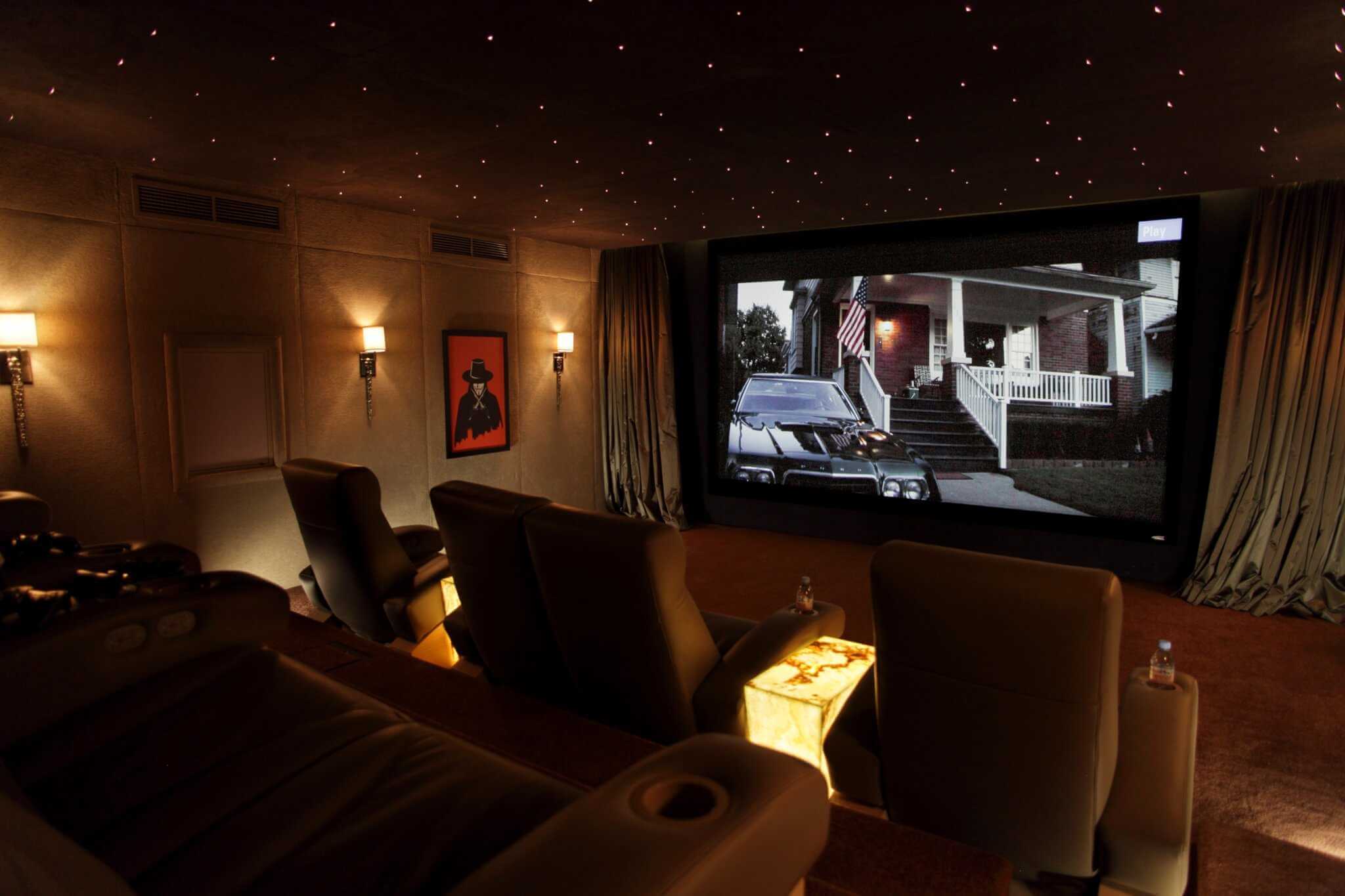 Opportunities to install Home Cinema rooms at this level are rare, we had an opportunity to turn a blank, unused room into a fully finished home cinema room -creating the ultimate home cinema installation Dubai! The result is breathtaking: a 3.5m projector screen displays images from a SIM2 Lumis 3D projector whilst audio is provided by the amazing Artcoustic Spitfire Cinema System. Even the room dimensions have been designed to provide the best possible surround sound experience! This is the Ultimate Home Cinema Installation: 3.5m projection screen showing 3D images at 1080p and full surround sound delivered by a 17 channel audio system.

Audio and Video for the Home Cinema:

The high end audio required for this room is beautifully handled by an Artcoustic Spitfire cinema package – front left, centre and front right are installed in a recess behind the acoustically transparent projector screen. Also installed behind the screen are four Artcoustic Spitfire Subwoofers delivering formidable bass in a very efficient manner. Being behind the screen perfectly combines sound and picture and gives a natural feel to film watching. Each row of Cineak seats benefits from its own pair of Artcoustic surround speakers, ensuring that wherever you’re seated, you experience full immersive surround sound. Seventeen channels of Anthem amplification ensure there is always enough power to drive the speakers during even the most demanding films or, the client’s favourite, Blu-Ray concerts.
Video is served up by the incredible SIM2 Lumis 3DS projector – the 1080p 3000 Lumens specification only hints at how special it is. The projector easily illuminates the 3.5m screen providing exceedingly life-like, vivid colours and sharp blacks.

The uncompromising nature of this home cinema meant that the actual room had to be designed from the ground up to give the best possible audio video experience. The room itself is an ultimate trapagon (the screen end of the room is slightly smaller than the rear and the room reduces slightly in width as it gets towards the rear) which ensures sound waves reflect in an optimum way – this provides absolutely superb accoustics and is the best theoretical solution. The wall which houses the projector screen is actually a false wall, featuring a cavity behind the screen which houses the Artcoustic speakers and allows easy integration of curtains and lighting. The lighting is enhanced by the star effect ceiling which does not distract even when watching films and complements the LED step lighting and Onyx tables installed between the Cineak Vedette chairs.

As this home cinema is part of a full Crestron controlled home, a Crestron TPS-6X wireless remote control allows easy control of the room, from lighting to air conditioning. One button press even switches the projector and all amplifiers on and routes video through the Crestron Digital Media matrix to the projector, while simultaneously opening the screen curtains and selecting the movie lighting scene. The cinema has a huge Blu-Ray and DVD film library available through a Kaleidescape Server system and also benefits from Satellite TV and Apple TV feeds. Rack mounted games consoles allow the client to play games on the huge 3.5m screen! If all those AV sources aren’t enough then a Crestron wall plate allows the client to plug in a local source (video camera, new games console, etc.) and enjoy it through the home cinema system.
This truly is home cinema at its best and is in almost daily use since completion.