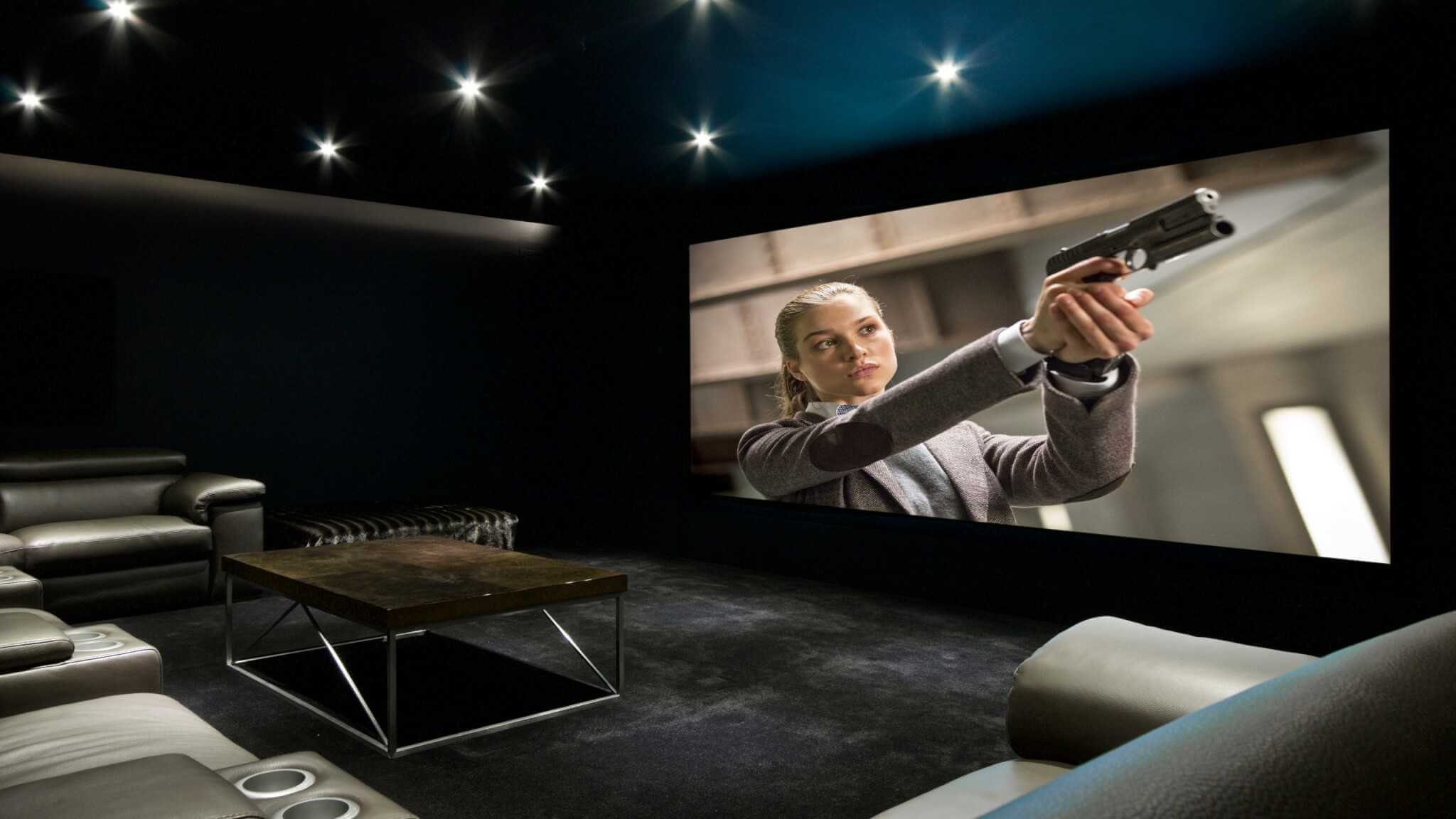 Home Cinema Installation Derby: This is a truly stunning home cinema room – excellent picture quality courtesy of the super bright, high resolution Sony 4K projector and amazing sound via a full Artcoustic Spitfire SL sound system. The finished room just works beautifully; it is a pleasure to watch films on the 4m wide projector screen, as well as being easy control via a custom built Crestron iPad interface. Budget home cinema doesn’t get any better than this.

This dedicated home cinema room is one of the nicest we have installed. The Sony VPL-VW1000ES is one of the best Ultra HD projectors delivering a huge 4096 x 2160 resolution – with huge contrast and brightness – on to a 3.8m (150″) acoustically transparent screen.

After our initial meeting with the client it quickly became apparent he had the same wish list for his home cinema that we did: outstanding visuals and sound, excellent aesthetics and ease of use. The partnering of the Sony 4k projector and Screen Excellence Enlightor 4K screen was the obvious choice at this price point. As the screen is acoustically transparent we were also able to house a full complement of Artcoustic SL speakers behind the screen, ensuring audio and video are in perfect harmony. Our carpentry team built a false wall which was covered in acoustically transparent material, allowing us to tune the room without ugly sound treatments being on show.

The picture quality from the Sony 4K projector is immense, extremely bright (although this room is underground so we are able to control light levels very easily) with super deep blacks. The screen is designed with this resolution of projector in mind, ensuring it delivers the ultimate picture quality. The sound quality is extremely high end with 3 x Artcoustic 180-43SL speakers being backed up by 2 x 180-43 Subwoofers – an excellent quality front sound stage. The rear surround channels are easily handled by 4 x Artcoustic 40-30SL on-wall speakers which are a mere 67mm deep and finished in black so as to blend in well with the dark room interior. All these speakers are powered by the clients existing top of the range Pioneer Home Cinema Receiver.

The entire system is controlled by a Crestron control system with the in-room remote control duties handled by an iPad. Pressing one button brings on the projector, home cinema amplifier and the client’s choice of source, from Sky HD through to Sony 4K Blu-Ray players and Apple TV. Video distribution, even up to 4K resolutions, is handled by the whole home Crestron Digital Media system. Using the iPad as a controller enables us to use the interface throughout the home, allowing the client’s guests to control the cinema as easily as they would the 40″ TVs in the guest bedrooms.