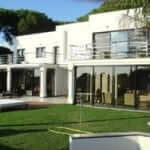 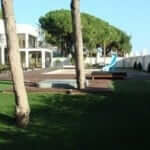 This install of a Rako wireless lighting system in this villa in Marbella, Spain created some technological challenges for us – the villa was substantial, split over 3 floors and of a concrete and marble construction. The Rako wireless lighting system relies on radio waves to communicate between fittings, we knew this wouldn’t be an issue in the individual rooms although a couple of potential issues were identified:

During the planning stages of the project these issues were dealt with by installing radio repeaters on each floor of the home.

Extensive Lighting control throughout the Villa

Individual rooms benefited from extensive controls – all the bedrooms had keypads mounted by the bedroom door, the en suite door and the bed heads. Each keypad enables scene selection including a night scene where it is possible to switch on dimmed lights in the en suite without switching noisy extractor fans on.

The whole villa Crestron audio and video system also has complete control of the villa lighting system allowing control of lighting scenes from remote controls and Crestron touchpanel’s in each room.

This case study is a republication from our old website.